Due to various supply chain challenges related to the COVID-19 epidemic, we are experiencing delays in fulfilling orders.

We believe we have now resolved most of our supply chain issues, but we now have a significant backlog to work through. As a result, please be aware when placing a new order, it will likely be a couple/few weeks before it will ship. The exact ship date will depend on the exact products on the order and how quickly we can work through the existing backlog.

Customers with urgent needs due to tower-down emergencies or similar should contact us via phone at (406)-449-3345 and also via email to custsvc@packetflux.com. 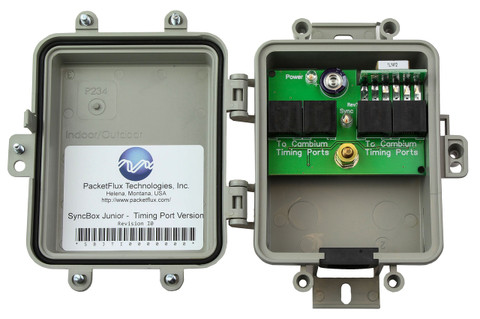 Hover over image to zoom

DUE TO LOW DEMAND, THIS PRODUCT WILL BE MADE TO ORDER. PLEASE ALLOW 2 WEEKS FOR PRODUCTION TIME.

The SyncBox Junior Timing Port version is a GPS timing receiver which is fully compatible with Cambium Access Points and Backhaul radios.  The main features are:

This product hasn't received any reviews yet. Be the first to review this product!

All prices are in USD.